This article is written in partnership with Artrade (find out more)

Artrade, a French start-up to connect creators and their audiences

Undeniably, the year 2021 was marked by the explosion of the non-fungible tokens (NFTs) sector. Although in existence since around 2017, this new technology allows to make a token unique and identifiable really enjoyed its success from August of last year. As proof, the volume represented by NFTs has increased by nearly 43,000% in just one year.

Among the different use cases of non-fungible tokens, it is particularly in art and collections that they made themselves known. Indeed, they make it possible to store an image, a video or a GIF on the blockchain and certify its authenticity. Moreover, one of the first NFTs projects that really emerged is the CryptoPunks collection from Larva Labs.

In addition, many platforms offering the purchase of NFTs have already positioned themselves in this flourishing market, such as OpenSea or Rarible on the Ethereum (ETH) blockchain. However, they are not not really user-centric, nor for that matter on the creator:

“Artrade intends to change that. The application has been designed to meet the needs of as many people as possible, as simply as possible. It is a question both of making the NFTs pass to the rank of goods comparable to physical and real goods. But also to give artists and creators the exposure and recognition they deserve. ”

Created in March 2021, Artrade is a web and mobile application making it possible to consult, reference, store, buy and create NFTs in the simplest possible way. Inspired by the user experiences of the most popular social networks, including Instagram, the French start-up aims to make the universe of NFTs accessible to everyone.

A desire to make the NFTs market accessible

Those of you who have already bought an NFT on OpenSea, Rarible or even Solanart can attest, the use of these platforms is not very intuitive and is mainly reserved for those used to the blockchain. On the contrary, Artrade is designed so that even beginners in cryptocurrency can simply invest in the digital art market.

A simple user interface, clean, and close to the social networks we know – Source: Whitepaper of Artrade

The Artrade app has traditional features of a social network. There is a news feed displaying digital works that may interest us, like Pinterest. In addition, users can there follow artist profiles that they appreciate to find all their best creations. They can also share and communicate with other users and obviously, get the NFTs that make them want.

The various functionalities of Artrade

First of all, Artrade users can trade, buy or sell NFTs, in cryptocurrencies or fiat currencies. Supporting fiat payments was a priority for the Artrade team, in its ambition to take on as many new users as possible. Resting on the Stripe payment system, which ensures the conversion between fiat currencies and cryptocurrencies, it will therefore be possible to pay with a simple bank card.

Most awaited option, NFT Live allows you to create a “live” NFT from a phone or mobile device. It is immediately customizable by adding effects (GIF, emoji, filters, text, etc.). That said, only certain users will be able to have access to NFT Live, because it will be necessary to have more than 10,000 subscribers on one of its social networks.

Finally, Artrade offers a feature called NFT Real. By this means, a user can carry out a sale transaction of an NFT associated with a physical and real good. In other words, if you want to sell any item, Artrade proposes to associate an NFT with it and put it up for sale on its platform. This option is particularly interesting for artists wishing to sell a work by certifying its authenticity.

Artrade through the prism of its values

In his whitepaper, the creator of Artrade explains to us that he was very inspired of the spirit of Sanpo Yoshi, a very prosperous community of merchants between the 17th and 19th centuries. They are at the origin of a concept on which the French start-up wanted to register its project, “Three-Way Satisfaction”. In other words, good for the seller, good for the buyer, and good for society. 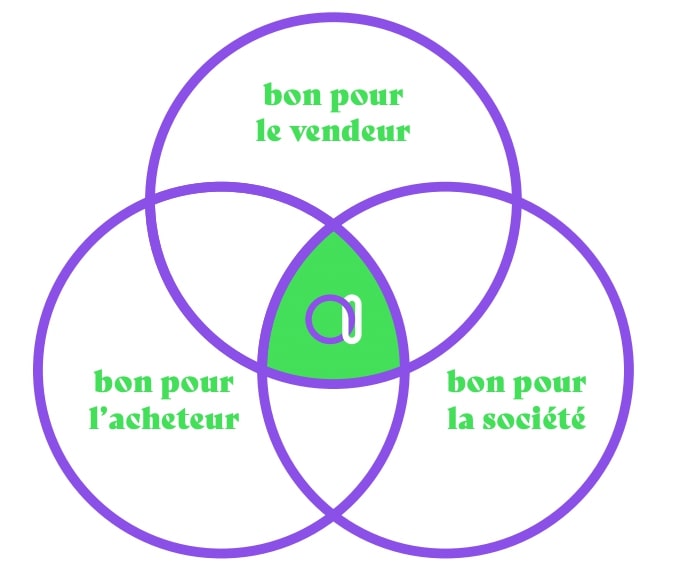 Artrade’s values: putting the buyer, the seller and the company back at the center of the economy – Source: Whitepaper of Artrade

To put it simply, sellers are found “In a controlled and secure environment, allowing them to keep control” and buyers “Benefit from total transparency and guarantees on their purchases”. As for the company, this is an important aspect of Artrade’s values, and we will come back to it later, which is why the team wishes to reward part of their profits. to climate projects and charities via ClimatePartner and the Blockchain Charity Wallet.

To be in the vein of blockchain projects, Artrade has chosen to launch theATR, its own native token. A true cornerstone of the platform, it plays a role in just about any operation that a user can perform.

First of all, it’s a utility token. All users purchasing NFTs on Artrade using ATRs will benefit from reduced transaction fees. If a user imports an NFT and exposes it on their profile, it will generate passive income in ATR in proportion to the value of his work. If a user shares content and exhibits other NFTs in their own gallery, they contribute to the functioning of the platform and are also rewarded in ATR. In short, it is a form of “Play-to-earn”.

Obviously, Artrade has chosen to decentralize many aspects of its business model, including governance. Inasmuch as governance token, ATR grants the holders a right to vote in the important decisions of the project, in proportion to the number of tokens held.

To develop its project, Artrade bet on an ICO of his ATR token. In total, 900 million tokens will be distributed, or 50% of the total supply, at an initial price of $ 0.02. The capital thus raised, i.e. $ 30 million according to the team’s estimates, will be used to finance the changes necessary for the development of the platform over the next three years.

The Solana blockchain, an eco-responsible solution

Mostly used at the start of emergence any new market, in particular that of non-fungible tokens, the Ethereum blockchain is now more than saturated. So this poses big problems in terms of network costs and energy consumption. Although new second-layer solutions come to relieve Ethereum, Artrade has chosen to focus on Solana, a more scalable and efficient blockchain in terms of cost, speed and energy consumption.

Indeed, this blockchain promises an average of 65,000 transactions per second, a cost per transaction of a few dollars for a transaction execution speed of 0.4 seconds. In view of the impact of the mint of an NFT (the action of creating and implementing it in the blockchain), it is true that the choice of a low-energy blockchain is essential.

Of course, the French start-up also wishes rely on the strong community available to the Solana ecosystem, especially in the NFTs market.

Open on November 15, 2021, the first round of Artrade’s ICO has already raised $ 1.5 million. At the time of writing, no less than $ 2.5 million has been raised by Artrade, or nearly 15% of the total target. If you want to participate, don’t worry, Round 2 of the ICO ends on January 20.

👉 Learn more about the ICO of Artrade

This is a sponsored and paid article. Cryptoast has made preliminary research on the products or services presented on this page but could not be held responsible, directly or indirectly, for any damage or loss caused following the use of a good or service put forward in this article. Investments related to crypto-assets are risky by nature, readers should do their own research before taking any action and invest only within the limits of their financial capacity. This article does not constitute investment advice.

About the Author : Lilian aliaga

Freelance writer located between Paris and Toulouse. I want to share my passion for the world of cryptocurrencies with as many people as possible. I am also interested in technical analysis and trading.
All articles by Lilian Aliaga.

Continue to the category
NFTs

G2 Esports team to release NFTs in collaboration with Metaplex