Home Cryptocurrency AVAX: Beware of a bearish reversal after the new ATH!


Avalanche has just posted a new stock market record at $ 101.92 during this trading session but the chartist figures suggest a stinging correction after this ATH.

AVAX course has started an excellent bullish phase over the past two weeks. It took 51.4% over the period, taking advantage of the same blow to reverse its September plus.

Avalanche’s rise has been fueled by the massive adoption of its blockchain and mega financing plan. At the end of October, Ampleforth integrates with Avalanche to introduce an alternative stablecoin solution. Just recently, the crypto announced that it would set up a $ 200 million fund to expand and improve its ecosystem.

Probability of exhaustion after this rally 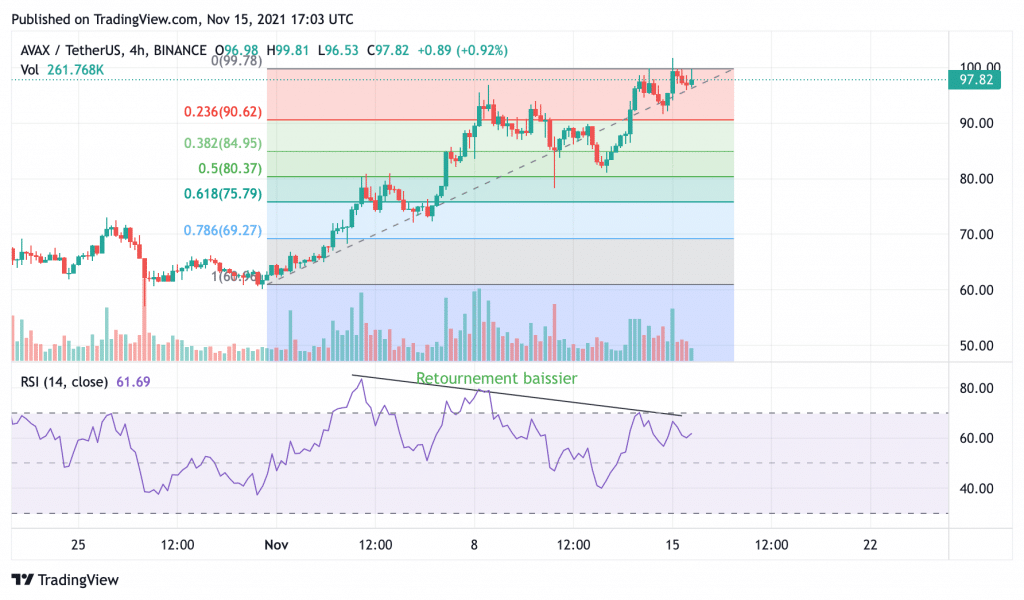 Avalanche is among the best performances of the top 20 this November. A bullish move at over half of its value and a new ATH, the crypto couldn’t ask for better. On the graphical side, the price of AVAX exceeds its short and medium term moving averages. However, it turns out that the crypto is approaching a phase of exhaustion even if it means causing a correction in its value.

Scrolling through the Fibonacci extension from the start of the bullish phase, the most likely target for the crypto is $ 75.79 even though $ 80.37 is a fairly compact area considering its fibo at 0.5.

The other argument that corroborates this bearish divergence is the decline in trading volume as the AVAX hits its highs. We know that the fluctuations of the volume indicator are proportional to the evolution of the RSI. At the time of writing this article, the price of Avalanche is up 4.02% while the intraday trading volume is down 11.24%.

So in an equivalence system, where volume replaces RSI, the theory of bearish divergence is indeed validated.

The downside of our reasoning

Currently, the market is not in a strong phase of volatility. Major cryptocurrencies are struggling to stretch up their range. Bitcoin and Ethereum are stagnating on the stock market. In the event that these two manage to recover, it will inject a bullish momentum into the market even if it means causing an overall rebound in the market. In this case, our assumption of bearish reversal of the Avalanche would be invalidated.

Otherwise, the AVAX heads straight for a correction. However, if this correction results in a consolidation in a range and the crypto ends up reversing this range, it is certain that it will reach new highs on the stock market.

NB: The conclusions of the following analysis are the sole opinions of the author and should not be taken as investment advice.