After the successful launch of the Lazio Fan Token (LAZIO), the Binance platform has just released its second fan token. With that of one of the most popular Portuguese clubs: FC Porto.

After a 10-day BNB holding period for users of the Binance platform, the PORTO token has been available on the exchanges since midday. With a price which was multiplied by 10 from the first minutes.

The token was uploaded via Launchpad, the token launcher of the Binance platform. In all, the platform planned to sell 4 million PORTO tokens. At a unit price of $ 1. A reasonable purchase price when we know that the token is traded today on the market for more than $ 10. But to get your share of the pie on Binance, you had to own BNB tokens. Lots of BNB tokens.

The allocation of PORTO tokens therefore depended on the average amount of BNB in ​​the users’ Binance account over a period of 10 days between November 6 and November 16. This morning, the final average allowed users to commit a maximum BNB. During a subscription period that will have lasted 3 hours, between 7 a.m. and 10 a.m. this morning.

In all, the project will have attracted more than 190,000 people in 3 hours. For a committed sum greater than 8 million BNB. Or an amount close to $ 5 billion. Further proof if any of the capacity of the Binance platform attracted a large number of investors to the projects presented. For some, this great success was even experienced as a source of frustration. Thus, on social networks, many users have complained that they are sometimes given only one or two tokens for having committed several thousand dollars.

The following chart shows the price of the PORTO asset over the day: 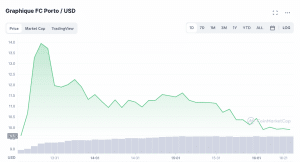 According to data from CoinMarketCap, the first known price is $ 9.6. In the first minutes of availability on the exchanges, the price of the asset climbed to a level close to 13 dollars. After this bullish peak shortly after 1:20 p.m., the token experienced a first low. He is currently entering his correction phase.

If we take the price of the LAZIO token, also put online by the Binance platform, it experienced a stronger increase during the first hours. Indeed, the token experienced an ATH of more than 35 dollars, only a few hours after the launch on exchanges like Pancakeswap. However, the situations seem quite different with regard to the global cryptocurrency market. Indeed, the FC Porto Fan Token may have suffered from negative market conditions in the crypto sector. In the space of 24 hours, the overall marketcap has lost almost 7%. A market that could explain the poorer performance compared to the LAZIO token.

What about the Chiliz token? 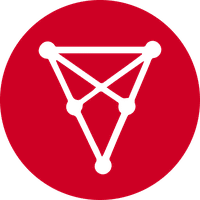 Like the entire crypto sector, the CHZ token of the Socios.com platform suffered from unfavorable conditions throughout the day. At the time of this writing, the token is trading for $ 0.49, a price down nearly 10% over the past 24 hours.

However, this decline seems to be due more to general market conditions than to a failure of the project. In addition, the Socios.com platform on which the CHZ token is based has just announced new partnerships with a legendary NFL team: New England Patriots. The desire for development of the project leaders therefore once again seems to be confirmed.

1 Suppliers with your criteria

67% of retail investor accounts lose money when trading CFDs with this provider.