Home Cryptocurrency UMA crypto back in the top 100!


Thanks to an increase of more than 30% over the last 24 hours, the UMA crypto token is making a comeback in the top 100 of the main crypto projects. This is explained by the launch of its “Across” protocol which allows L1 chains (layer 1) to be linked to L2 chains (layer 2).

With a project which seems to open up more possibilities than a competitor like Synthetix, UMA has not stopped developing for several months. While the marketcap is over a billion dollars, the project could continue to grow in the months and years to come.

Focus on the UMA Project 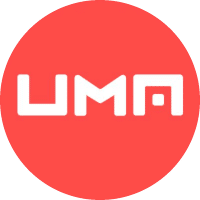 The UMA project focuses on the crypto derivatives market. The platform is presented as a platform for decentralized financial contracts ”. Very concretely, owning a derivative means that you do not own the asset concerned but a kind of “copy”. Like a CFD that can be found on certain products at online brokers.

Good to know : The derivatives market is today the most important market in the world. It allows the UMA project to consider an almost infinite development of its solution. A solution that is therefore not confined to cryptocurrencies.

The UMA project is a serious competitor to the Synthetix platform. A crypto project which today finds itself at the gates of the top 100 (103rd at the time of this writing for a marketcap of 1.1 billion dollars). But unlike Synthetix, UMA allows greater freedom in the creation of new derivatives. The solution deployed by the company also works on the Ethereum network.

The following graph shows the price of the UMA token over the year 2021: 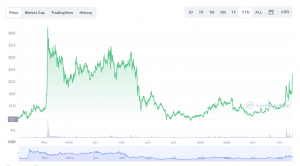 If the project has sometimes followed the trend of the global cryptocurrency market, it has also evolved very independently. As evidenced by the very strong increase at the beginning of last February. An increase that will have allowed the token to multiply its price by more than 4 in the space of a few weeks. The pump even pushed the token to its highest historical level (ATH) on February 4th. With a highest level recorded at $ 43.37 according to data from CoinMarketCap.

After this period of very strong growth, the project went through a two-step correction phase. The first step allowed the market to digest the rise. The second phase echoed the fall of the cryptocurrency sector in mid-May. If the project then started to rise again at the end of July, the momentum was much less than for other crypto projects.

As of this writing, a token is trading for $ 22.07. Up 36% over the last 24 hours. An increase that is to be put to the credit of launch of the “Across” protocol, a bridge between the Layer 1 and Layer 2 chains considered by the platform to be faster, cheaper and the most secure. Project leaders and observers consider that this launch is the sine qua non for a sustainable rise in the price of the token.

Crypto UMA: A return to ATH?

Now the question is on everyone’s lips. After the recent rise, investors who have kept the token in their portfolio are just waiting for this.

If one relies on the prediction algorithms, a double tendency seems to stand out. The first could be the correction in the price of the asset in the days or weeks to come. Often, a strong upward phase is followed by a downward momentum which can last longer or shorter. In the longer term, the platform models seem to give some form of credit to the UMA project. Thereby, DigitalCoinPrice considers probable that the asset will double its price by 2023.

At the house of TradingBeasts and WalletInvestor, we also expect a long-term uptrend. But in much more reasoned proportions. In view of these elements, it is difficult to consider a rapid return to ATH. Unless the increase initiated today comes to extend more widely.

1 Suppliers with your criteria

78.77% of retail investor accounts lose money when trading CFDs with this provider.