The famous stable announced on its site a partnership from the next season with the blockchain Velas (VLX). This agreement would take effect from the next Formula 1 season.

Velas Network is a Swiss company made up of engineers, cryptographers, researchers and mathematicians. She is specialized in creation and integration of digital products and services like non-fungible tokens (NFTs).

The contract signed between the two firms announces the creation of exclusive digital content for fans of the prancing horse brand.

” We are delighted to begin this partnership with Velas Network, a company that makes innovation and performance the hallmark of its state-of-the-art services: these are all values ​​that unite us and that have brought us to choose them as one of our premium partners. “

The partnership also specifies that Velas will also become the main sponsor of the Ferrari Esports Series as well as the official team that will participate in the virtual F1 championship.

👉 To read on the same subject: FTX signs a new sponsorship contract with the Mercedes-AMG Petronas F1 team

Impact on the VLX token and the Ferrari share

Note that the price of the VLX climbed shortly after the announcement of its partnership with Ferrari, rising from around $ 0.25 to over $ 0.45 within a few hours, an increase of 83%. The token is currently trading around $ 0.4.

Ferrari share price continues to climb, posting $ 256.40 as a rise of 1.75% since the last close, but it would be premature to claim that this is due to the announcement of the partnership with Velas Network. 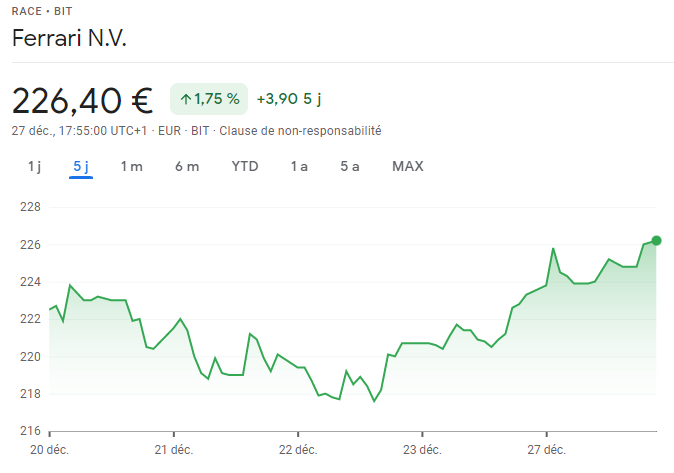 Evolution of the Ferrari course (RACE) over one week – Source: Google Finance

Partnerships between blockchain projects and sports teams are multiplying. We think in particular of the company Crypto.com (CRO), which stands out from its competitors by investing heavily in the sponsorship of teams and sports infrastructure. She also recently bought herself some advertising time during the major sporting event that is the Super Bowl, watched by more than 90 million viewers annually. But his biggest blow remains his partnership with the Staples Center in Los Angeles for the colossal sum of $ 700 million.

In the automotive world in particular, we are also seeing the trend. We can notably cite its partnership with Formula 1 or that ofAston Martin team last March. But Crypto.com is not the only one. The FTX exchange platform announced its collaboration with the Mercedes AMG Petronas team a few months ago.

We can also cite the Red Bull F1 team which joined forces with the Tezos (XTZ) blockchain in order to create, among other things, Exclusive NFTs. The trend should therefore continue in the coming months.

About the Author : Maximilian Prue

Passionate about the world of decentralized finance and the novelties brought by Web 3.0, I write articles for Cryptoast in order to help make the blockchain more accessible to all. Convinced that cryptocurrencies will change the future very soon.
All articles by Maximilien Prué.

Continue to the category
Blockchain

China wants to launch an NFT industry, without using cryptocurrencies